Is There Something JellyFishy With Langkawi?

The image of a large Chironex species of box jellyfish that heads this page was snapped by an amateur photographer at Langkawi, the jewel of the north in Malaysia's tourism crown.

The photograph was effortlessly taken around 9pm on 12th May, 2010 at Telaga Harbour, Langkawi from a moored boat using a camera and flash.

In March, 2021, the Centre for Marine and Coastal Studies  (CEMACS) - Malaysia's leading marine education and research body - announced the release of a book: Field Guide to the Jellyfish of Western Pacific.

A collaborative work where individual nation members of the IOC Westpac have tabled and published their extensive research in jellyfish taxonomy and identification, the book is the first of its kind in the region and a comprehensive, definitive guide on jellyfish in the Western Pacific.

That is, except for, the large Chironex species in this photograph.

Langkawi and nearby Penang, according to this new book, do not have a large Chironex species in their surrounding seas.

Here's another image taken at Langkawi almost 11 years ago. An impressively big animal.

It sure does look like a Chironex. Distinctive features including the bell, pedalia, tentacles, etc certainly indicate that it is a large species of Chirodropid that could not be anything except for a Chironex, the world's most venomous animal and a known killer.

In fact, there is documented evidence that a large species of Chironex has been responsible for multiple fatalities at Langkawi.

As recently as 2018, a Swedish man on vacation was tragically killed by a jellyfish with all of the evidence yet again pointing to the culprit being a Chironex.

Read about the 2018 Langkawi death:

Why is it that Malaysia's premier island tourism destination, Langkawi, does not officially acknowledge or recognise a species of Chironex in their waters, and have it noted in the recently published Field Guide to the Jellyfish of Western Pacific?

We have no idea. It is conspicuous by its absence.

CEMACS is a long-established and well-resourced scientific institution within the Universiti Sains Malaysia and based on Penang. They have the knowledge, the expertise and the capability to find, study and identify jellyfish as they have done very thoroughly and competently in the book.

The list of jellyfish species identified in Malaysia including Langkawi and Penang is quite long. In terms of box jellyfish or Cubozoa, those identified as inhabiting Langkawi waters were the Carybdeid, Morbakka sp. and the smaller Chirodropid, Chiropsoides buitendjiki. Both cause extremely painful stings, neither is an established killer.

The Gulf of Thailand and the Andaman Sea (not linked to Malaysia) have a lethal Chironex species, Indrasaksajiae, while the same areas in Thailand plus Sri Lanka have a deadly Sea Wasp species of Chironex. Nothing though for Langkawi or Penang.

Could it be that the Chironex species in these photos is just so elusive that no one in Malaysian marine science has, in over a decade, managed to see one or photograph one or catch one? The legendary Langkawi-Less Monster? The mythical Big Tentacle? The Abominable Boxie? 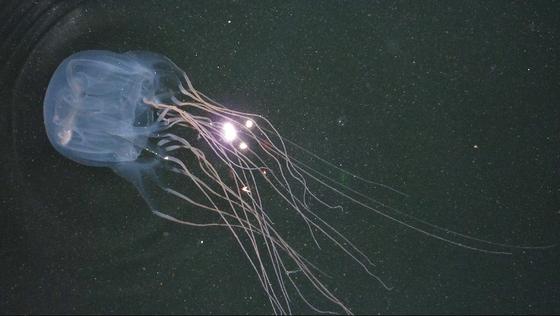 Here's another photo from 11 years ago. At Langkawi.

Could it be that this box jellyfish and those responsible for serious stings and deaths at Langkawi were alien species that drifted south to invade and raid Telaga Harbour, Pantai Cenang and Tanjung Rhu, then swam all the way back home?

Read about the 2010 Langkawi death:

Powerful Langkawi MP and former Prime Minister Mahathir Mohamad, who almost single-handedly transformed the island from a fishing backwater to a tourism hotspot, continues even today to strongly push the case on the international investment and tourism stage for his profitable pet project, Langkawi.

Could it be that ... No, no of course not. Dr M? The Father of Modern Malaysia? The King of Langkawi? The mere suggestion is ludicrous. Isn't it?

Read about the 2010 Langkawi death cover-up:

Unquestionably, there is a lethal species of box jellyfish somewhere in the coastal waters of Langkawi. For many years, its devastating impact has been felt around the island, and in memorials for lost loved ones around the world. 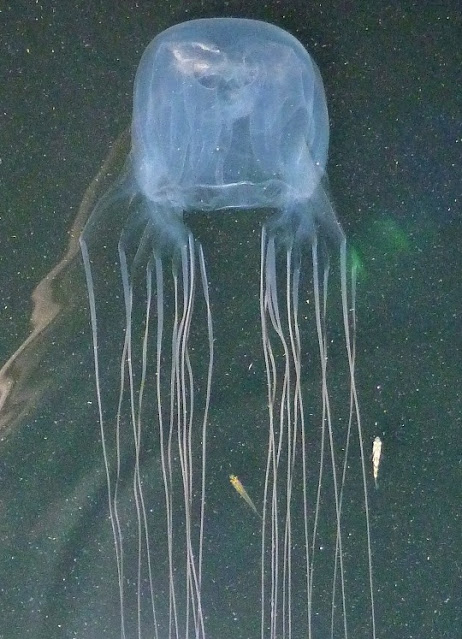