Hawai'ian hospitality usually delivered with a traditional lei welcome has gone to the next level. And this time you could be the lucky one saying "aaaaaargh" instead of "aloha". The call has gone out on local TV for volunteers, and for a princely reward of US$100, you can subject your body and soul to a box jellyfish sting.

Ostensibly all in the name of science. Did someone mention 'ethics'?

The brain-child of Dr Angel Yanagihara, local Hawai'ian television network Khon2's 'Wake Up 2Day' program put the call out, with a typo, while interviewing Yanagihara and plugging her products in an infomercial style segment in June.


Yanagihara is the founder and director of Alatalab Solutions who develop, market and sell sprays, creams and kits claimed to treat jellyfish stings, including those from deadly box jellyfish ie. Chironex species.

Yanagihara's aim is to conduct clinically controlled laboratory tests on willing volunteers keen to experience the excruciating pain of a jellyfish sting then walk away with a hard-earned, white-knuckled fist full of greenbacks. 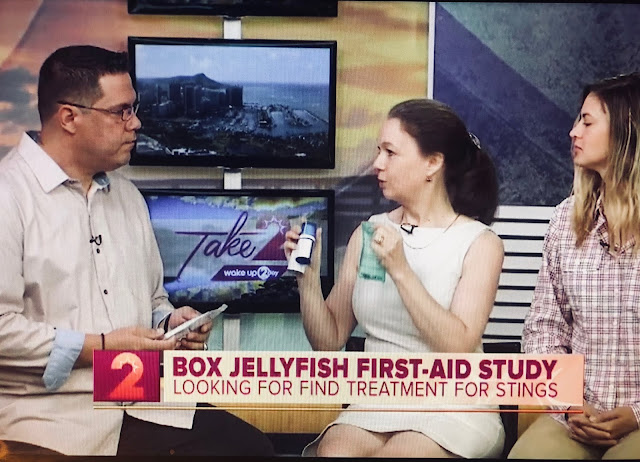 'Sting No More' is Alatalab Solutions' flagship product. The brand is mentioned and recommended by Yanagihara at every opportunity in social media and other debates surrounding box jellyfish sting treatment and widely spruiked around the world with today's focus on the Philippines, a country currently desperately searching for real solutions.

One hopes it 100% works. A biochemist and research scientist at the University of Hawai'i, Yanagihara is eminently qualified to make it happen. And there is evidence in the form of a 'peer-approved' research publication (grant-funded to commercialise the products) that is authored by Yanagihara herself titled, "Cubozoan Sting-Site Seawater Rinse, Scraping, and Ice Can Increase Venom Load: Upending Current First Aid Recommendations".


It's a compelling read. The scientific and medical experts are best placed to argue the facts, and, divided, they do. 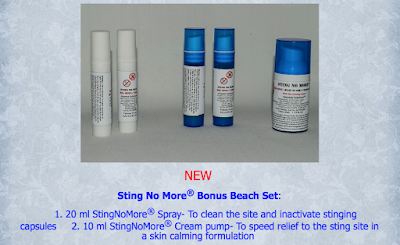 'Sting No More' spray which is mentioned throughout this scientific publication in terms of "best outcome", "only solution", "our results..support" is vinegar with added urea, magnesium sulphate and copper gluconate. The study suggests that 'Sting No More' detaches tentacles from the skin while neutralising the stinging cells.


Vinegar alone effectively neutralises the stinging cells (proven time and time again, and even confirmed in this study) but does not detach the tentacles - which can be harmlessly removed later once the victim survives the initial 'high risk of death' period of a minute or two.


In a completely unexpected, extreme-stress, panic-stricken, WTF life or death situation on a hot and sandy beach somewhere in South-East Asia where seconds are everything; what is the best solution when your loved-one or a complete stranger is suddenly screaming and writhing in agony and terror? When their heart is failing, breathing fading, body rapidly turning blue and plunging into a coma? When legs and ankles and torso are enveloped by a tangle of tentacles, no vital signs within a minute, CPR desperately needed to save a life? 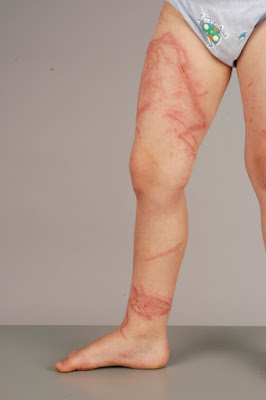 Pulling out 60ml of spray and 15ml of cream - total cost US$52.50 - (while activating the heat-pack included in the kit) and hoping those pesky pumps work instantly, no sand clogging, no fumbling, and your aim and the research is right; or liberally dousing the sting area with a litre bottle of household white vinegar - total cost US00.50c in countries like the Philippines, and stocked in every South-East Asia beachside restaurant.


Perhaps, a real-life scenario is the true test of one versus the other.
Ultimately, you the consumer and potential victim or first-responder need to decide.
Though, the upshot it seems is that cheap and readily-available vinegar is all that is needed, and it needs to be applied immediately, and continued for at least 30 seconds. Only after the stinging cells have been neutralised by the acetic acid in the vinegar, thus rendering the tentacles impotent, can the tentacles be safely removed.


Meanwhile in Honolulu: kids, throw away that carwash sponge and ditch the lemonade stand; students, the beer money's in the bank; retirees without heart conditions and high blood pressure, now you can really say 'still got it!'; homeless folk, hold onto your kidney; and beachgoers, you can splurge on a Large Pro Kit plus a Medium Eco Set and have a few cents to spare for vinegar on your fish and chips.

July 2019 Update Philippines: Note that after giving 'Sting No More' products away for free in coastal areas and promoting and selling ad nauseam, apparently Alatalab Solutions has NOT had and does NOT have FDA Philippines approval for these products. One presumes this means it's illegal in The Philippines. Just as well there's plenty of tried, true and government approved vinegar available.


Science magazine has published an article (8 November 2018 by Yao-Hua Law) on this story and the situation in the Philippines.

The Science article is essentially all about Dr Angel Yanagihara, and her jellyfish research and theory with particular emphasis on her spray.

It's an interesting 5-minute read that examines the science of her work. The writer Yao-Hua Law is reasonably balanced acknowledging that Yanagihara's theory of porins in box jellyfish venom causing hemolysis and cardiac arrest may be the case. May, as there's still not enough evidence.

Law quotes experts in toxinology and marine biology who have opposing views. And there are numerous others not quoted in this article who disagree with Yanagihara on many levels.

Yanagihara receives most of her funding from the US Department of Defence. They apparently instructed her to develop the spray and have facilitated its commercialisation.

The article touches on the argument of which is more appropriate and effective; vinegar or the spray. The spray - vinegar with added chemical ingredients as mentioned in this blog post - does exactly what vinegar does but also removes the tentacles. Is this such a big deal?

There's a suggestion in the article when Yanagihara demonstrates the spray on a Filipino volunteer who receives a box jellyfish sting that it eliminates pain. Does it?

The volunteer said that after 3-minutes the pain had 'eased'. Though this is quite normal. The pain does ease naturally without spray after a few minutes.

The issue is not the pain, it's survival. The chances of death in the first minutes and keeping the victim alive is the real issue.

Vinegar does not eliminate or reduce pain but it is widely acknowledged to disarm the tentacles and stop the stinging cells from firing. Some including Australian box jellyfish expert Dr Jamie Seymour disagree. Many including Yanagihara disagree with Seymour, though in this article he makes a good point. No matter what, the pain is not the killer.

How Safe Is Samui? - January 2021 Update Including Koh Phangan