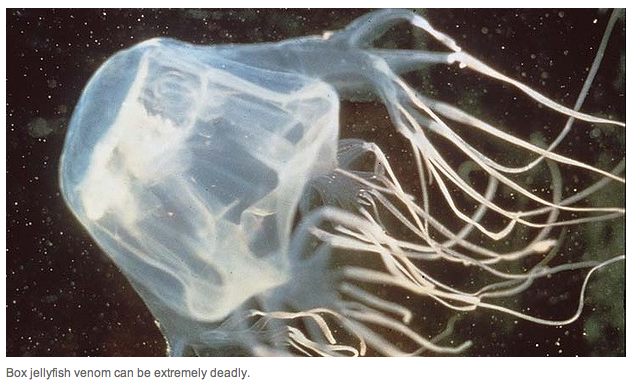 Australia's Sydney Morning Herald on 13 December, 2012 published a story on scientists learning more about the lethal toxin of the box jellyfish and how to combat it.


Click on the above link to the read the story - but note the following extract in the article from Australia's leading expert on the subject, Dr Ken Winkel of the AVRU, Melbourne University:

The director of the Australian Venom Research Unit at the University of Melbourne, Ken Winkel, said the study was valuable because it demonstrated zinc gluconate could block the effects of the venom in mice, but it did not conclusively show how box jellyfish venom killed mice or humans.
Previous studies have found a high dose of the venom kills mice by destroying their heart tissue, but Professor Yanagihara's study did not investigate this.
While the study found mice released high levels of potassium after envenomation, such levels had not been observed in stung patients, he said.
There was a role for drugs and antivenom, but they were of limited use to a person who was in cardiac arrest on the beach, Dr Winkel said.
"Prevention of stings is the utmost importance," he said.


Yes, prevention in the form of lycra suits and readily available vinegar are critical! This venom acts within seconds and a victim could be dead on the beach within a minute or 2 ..
Email Post