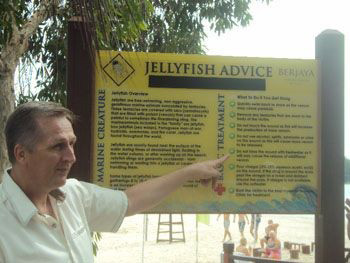 Great to hear that the Berjaya Resort Langkawi has continued to buck the trend of apathy, irresponsibility and disdain that to this day defines the attitude of Malaysia on the public health issue of box jellyfish stings that country refuses to address.

Instead of burying their head in the beautiful golden sand of their beach, the powers that be at Berjaya headed by an Australian experienced in box jellyfish prevention and treatment, acted swiftly to secure their resort and more importantly protect their customers.

A recent visitor report from Berjaya Resort Langkawi tells of a stunning land and seascape fringed in lush tropical jungle that is a 4-star sanctuary of immense popularity - and the only establishment in the entire country to install prevention nets, vinegar first-aid stations and sensible signage for the safety of their guests. The place was packed and people swam and enjoyed themselves - safe in the knowledge that their was an effective system in place.

Well done to management and staff of this amazing looking resort for tackling the issue with great courage, foresight and responsibility - unlike the rest of Malaysia who could not give a damn. 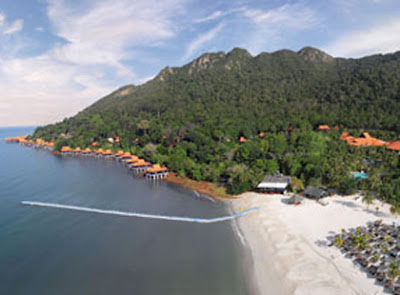 20 December 2010, Official Press Release
from Berjaya Resort Langkawi, Malaysia
LANGKAWI (Dec20): Berjaya Langkawi Resort scored a first with the implementation of the Jellyfish signage and vinegar poles at its beachfront this month. The idea was mooted by the resort's general manager Mr Graeme L. Dwyer who said this implementation is being practised by operators of famous tourist beaches in Australia.

He added, although the occurrences of jellyfish stings in these waters off Langkawi are not frequent, this implementation is being taken as a preventive measure in the interim period in the event of a jellyfish sting prior to seeking medical treatment.
"Every jellyfish sting, no matter what the species, is very painful and if left untreated can cause excessive pain and itching red welts that may last for days," he said in a press release yesterday.
He also said the resort had come up with a Standard Operating Procedure (SOP) on the jellyfish attack and had placed signages with the Risk Description and Vinegar Application Procedures clearly defined on the signages at the resort's beachfront this month. "We have also put up three vinegar poles at strategic spots on our beachfront as an interim remedial measure prior to receiving treatment in the event of a jellyfish sting.
"Although we have very isolated case of jellyfish attacks off our beach, we are not taking any chances," he told a press conference at the resort yesterday.
He added, initially the staff by the beach will treat victims with vinegar wash down to reduce further venom spread, if too severe they refer to the resort's Medical Assistant for further treatments.
"They will be treated with painkillers and antihistamines (by tablets form or injections) which can be repeated every four hourly. Also apply Stingose cream or Calamine lotions. The victim will be observed via courtesy calls to their chalets. If victims required urgent treatment they will be referred to Langkawi Hospital immediately," he added.
Dwyer said having vinegar on hand when you plan to go swimming may in fact save a life. It has been reported that when vinegar is used on a box jellyfish sting it is able to stop the venom from being discharged by the deadly marine creature.
When a box jellyfish stings you it does not release the full amount of its venom at the one time. Breaking the tentacles off from the body of the jellyfish will not prevent the venom from being discharged. With or without the body attached, the tentacles of the jellyfish will continue to release its venom.

"Vinegar is very useful in treating these stings. Vinegar work by breaking down the poisonous cells which are responsible for causing the painful reactions experienced by victims when the tentacles of a jellyfish come into contact with human skin.
"In thirty seconds you can stop the venom from spreading. It's always best to have a bottle of vinegar nearby when you venture out into the water," he added.
Dwyer said vinegar is still the best weapon against jellyfish stings and is recommended by many councils and institutions in Australia as being the best treatment for jellyfish stings.
"We believe we are the first resort here in Langkawi to do so and we will be working closely with Langkawi Hospital for a joint SOP to be put in place for jellyfish cases. I also hope to work together with MAH and LADA on this matter as the jellyfish issue in Langkawi has been widely speculated in the Trip Advisor Forum and we really need to get the information in the right perspective for the sake of tourism in Langkawi.