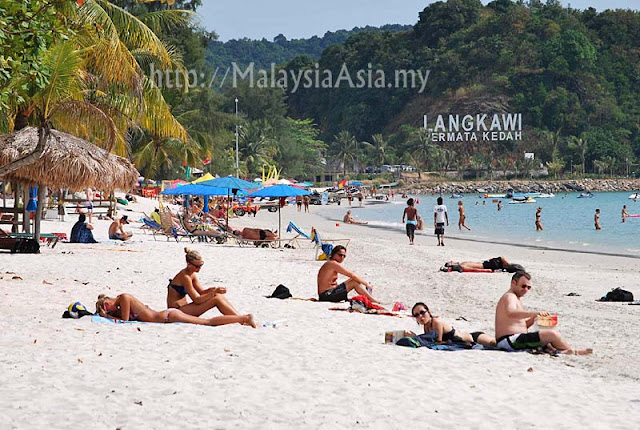 The beautiful and very popular north Queensland 'resort' town of Cairns with its international airport and renowned visitor facilities is the gateway to the Great Barrier Reef and one of Australia's Box Jellyfish hotspots.


Below are comments from experienced Emergency Physician Dr Jim Reeves who at the Cairns Base Hospital is at the frontline of Box Jellyfish and Irukandji treatment.

Dr Reeves was recently in Langkawi and was horrified to see unsuspecting people swimming in a popular self-proclaimed world-class tourist area near a number of dangerous Box Jellyfish but no warning signs, vinegar stations, prevention nets or any effort of visible swimmer safety were made available.

The first comment is Dr Reeves' reply to an article on this blog while the second was posted in a Tripadvisor thread on the subject:

Hi. Great blog site and good on you for trying to bring this out into the open. I am an emergency physician in Cairns, Australia and we live with irukandji and box jelly fish too. I started a thread in the trip advisor langkawi forum last year after being astounded at seeing 6 box jellyfish in the lights of a boat one night in the harbour next to the Dana resort. I was equally amazed at the lack of warnings and public awareness.
Box jellyfish without doubt posses the most toxic venom on the planet. The last few deaths in this region have all been children and they all died in less than a couple of minutes.
We are starting to see our first irukandji envenomations of this season. There is a spectrum but good going ones develop horrendous pain syndromes, very high blood pressures and occasionally fluid in the lungs. There have been 2 deaths due to irukandji in Aus but related to the extremely high blood pressure which led to intracerebral bleeds.
We have developed effective treatment protocols for managing irukanji syndrome and have anti venom for box jellyfish stings if they get to the department. Thankfully they are rare BECAUSE OF PUBLIC AWARENESS AND WARNING SIGNS, VINEGAR AT ALL THE BEACHES! STINGER SUITS! NETTED AREAS FOR SWIMMING AND WELL ESTABLISHED TREATMENT PROTOCOLS FOR THOSE STUNG !!
As you so rightly say if the government agencies refuse to acknowledge the problem then you are stuck and none of these straightforward measures can be put into place. Blogs such as yours are needed to continue to push the issue and continue to provide safe advice to those going there.
Avoiding jellyfish is very simple - you just have to know they are there and the local authorities should be doing that instead of denying their existence.
Well done mate
Jim, Cairns

19. Re: Beware of box jellyfish
Jan 15, 2012, 6:55 PM
Thanks for the heads up.
I hadn't had a look for quite some time.
Hats off to the person running that blog - very informative and VERY important ! The denial of a problem that is so obviously not going to go away astounds me.
I would love to have a look at the records of all those stung there this year. The descriptions do sound like irukandji. Interestingly there is a belief now that the syndrome may be caused by more than just the one type of jellyfish.
We are starting to get our first irukandji envenomations of the season and the pain some of those poor buggers go through before they are treated is horrendous. The protocols we use are relatively simple and effective using infusions of narcotics and sometimes magnesium - I don't know what treatment is given at health care facilities there - one would hope they have access to successful strategies .
I certainly wouldn't like to go through that without them - standing on a stonefish on an island off Vanuatu where there were minimal health facilities has given me insight and endless empathy. At least hot water helped a bit with the pain ! - which is not the case with jellyfish
Regards
Jim

As a footnote, reports from Irukandji sting victims admitted to the Langkawi hospital is that they are given a course of usually unidentified painkillers and sent on their way. Many return soon after when the pain becomes unbearable and can stay overnight receiving same treatment - but at least under observation, while most choose to be treated upon their return to their own countries. Magnesium here is unheard of, in fact, the problem is denied by the Dept of Health while a Langkawi official recently demonstrated at a seminar on the subject that a banana rubbed on the sting will fix the problem. He has obviously never been stung because that is absurd and a Box Jellyfish tentacle upon being rubbed would immediately shoot more lethal venom into the body.
While it is important that research be performed by marine scientists to raise awareness and formulate data, it is crucial that medicos like Dr Reeves write to the relevant authorities in Malaysia to express their views on the matter and offer their assistance if required. Might just save a life!
Email Post

How Safe Is Samui? - February 2020 Update Including Koh Phangan