The Chief of the Phuket Marine Biological Centre and Aquarium (www.pmbc.go.th/webpmbc/RE/ and http://www.phuketaquarium.org/) recently visited Australia on a Box Jellyfish fact-finding mission sponsored by the Australian government and he couldn't have timed his visit any better.

Dr Somchai Bussarawit managed the Thai government's premier marine reseach facility that also has 5 satellite centres around the country and has been leading Thailand's scientific efforts since the issue of the Box Jellyfish menace rose to prominence in late 2008.

While there was little sign of Irukandji, Dr Somchai caught his first Chironex fleckeri Box Jellyfish that he proudly displays in the embedded photo (photo by Kim Moss) then proceeded to capture numerous others as specimens for the PMBC. 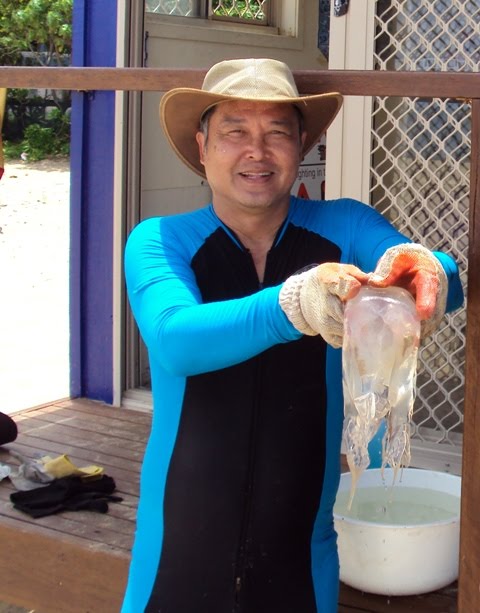 During Dr Somchai's visit a 10 year old girl was stung by a Chironex fleckeri near Gladstone (the southern most point where they are thought to inhabit on the eastern Queensland coast) though strangely 23km upriver on the Caliope River. She was badly stung and went into cardiac and respiratory arrest. Quick thinkers at the camp ground doused her with vinegar and she was rushed to meet an ambulance, her parents performing CPR along the way. In an induced coma for several days the girl barely and very luckily survived.

Dr Somchai's eventful trip was well received by all concerned and the various centres across Thailand are benefitting from his experience and implementing plans and procedures to better understand and manage Thailand's Chironex-type Box Jellyfish.

In March several senior Thailand medical officials involved in the area of epidemiology and active in researching their country's Box Jellyfish situation will also visit Australia courtesy of the Australian government to meet with experts and similarly transfer this knowledge to their country's experience. 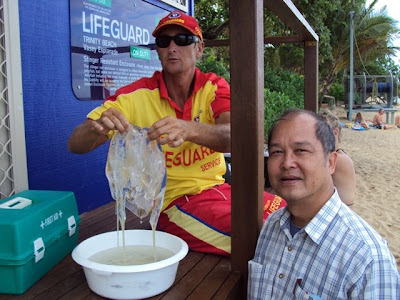 It is vitally important to note that these visits are a significant yet small step in the right direction  for Thailand which has an incredibly long way to go before effectively managing their Box Jellyfish problem - Australia for example has about 40 years head start. As is evidenced by this photo above (photo by Kim Moss) and systems in place throughout a vast area including beaches and schools, Australia is sophisticated in its response to the threat of Box Jellyfish while in Thailand there might be the odd sign - probably defaced - tucked away at the back of a beach or two and that is it.

In Thailand like with so many things the onus remains on the individual to take due care - carry your own vinegar and wear a stinger suit.
Email Post