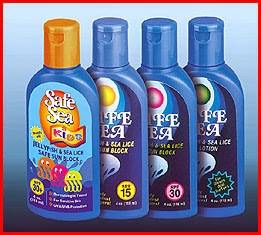 A product now on the market in Thailand is Safe Sea which claims to prevent jellyfish stings. Its been around for 10 years or so and is very popular in the USA. Its developer Nidaria is based in Israel and tested the lotion on several species of jellyfish mainly it seems in Florida and Japan.

While Safe Sea according to some studies (detailed on that company's website http://www.nidaria.com/) demonstrates a certain level of efficacy with certain species of jellyfish, NO testing has been undertaken on the world's deadliest animal that is reponsible for numerous deaths in Thailand and hundreds worldwide, the chironex-type box jellyfish.

The product is being marketed in Thailand by a company called Oceanline who throughout their advertising refer loosely to the Box Jellyfish while mentioning fatalities and showing images of stings. The danger is that this is misleading and could provide a false sense of security with their customers while at the same time undermining the efforts of the Thai government and others working towards better prevention and treatment methods.

Safe Sea is popular and may well help prevent stings of some jellyfish and other marine stingers however it is not proven on Thailand's killer jellyfish and if there is no scientific evidence then it should not be relied on.
Email Post

How Safe Is Samui? - January 2020 Update Including Koh Phangan